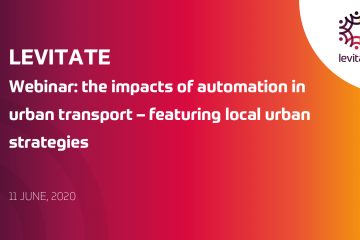 What impacts connected and automated driving will have on urban transport, in our local context? Find out!

The second LEVITATE webinar on 11 June was organized around the theme of urban transport and the impacts of automation on local level, brought by two city and transport authority representatives as well as the work package leader (National Technical University of Athens) on urban transport sharing their views.

The webinar was kicked off by Anna Craciun, project lead on LEVITATE at Transport for Greater Manchester, who presented Manchester’s transport vision, CAVs policy and need of innovations due to the COVID-19 crisis. Her colleague Hannah (ITS Engineer) gave an outlook about these future developments mentioning smart junctions and 5G network and video analytics in transport, which can facilitate the use of connected and automated vehicles in an urban context. They highlighted the importance of cooperation between local authorities in order to learn and get feedback from other cities’ experiences on innovations.

The second presentation was given by Professor George Yannis from the National Technical University of Athens who is the leader of the work package on urban transport in project LEVITATE. He presented the initial findings of their research on the specific impacts of automation in urban mobility, specifically on point-to-point shuttles and autonomous on demand shuttle services through impacts such as changes in CO2 emissions and delay time. The preliminary results are available in the recorded webinar. The main output of the project, the structure of the Policy Support Tool has been presented, as well.

Last, but not at least Michael Glotz-Richter from the Free Hanseatic City of Bremen (and member of the Stakeholder Reference Group of the project) gave a mind-blowing presentation about the viewpoint of a municipality on automation in transport. He clearly stated that automation is already here with us more than we would think, giving examples from recent innovations. He also highlighted that operation of autonomous vehicles are more difficult in an urban context, as separation is a challenge in an existing infrastructure. Although, as 90% of road vehicles (replacing individual car ownership) can be replaced by operating autonomous vehicle services, more space is going to free up in our cities.

The webinar induced an active discussion between the audience and the presenters which can be listened to in the recorded webinar together with the above-mentioned presentations.