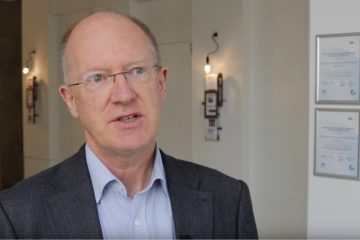 Pete Thomas, Project Coordinator, and project partners from the National Technical University of Athens and the University of Michigan express their views on the LEVITATE project during the second Consortium meeting in The Hague.

Have a look at the video: 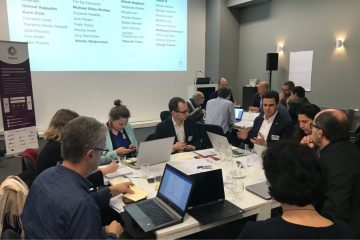 The LEVITATE Stakeholder Reference Group met for the second time in the project’s lifetime for a workshop held on 26 November in Brussels. 37 people from across Europe, including many representatives of local and regional government, took part. The workshop provided an overview of the mechanics of the launch of the developing Policy Support Tool, which will be one of the main outputs of the project and is being  established to enable policy makers and planners to run their own assessment of the potential impact of connected and automated transport systems in their city or region and across several transport policy domains.. Valuable insights were collected on how to further develop this tool.

The workshop opened with an introduction by Suzanne Hoadley (Polis) on the vision of Polis on automation and other European projects related to automation, followed by Pete Thomas (Loughborough University), who introduced the LEVITATE project, its objectives and the aim of the workshop.

The first session focused on giving an overview of  the Policy Support Tool (PST): its components, what it can and cannot do, what input will be required and what the output might look like. George Yannis (National Technical University of Athens) demonstrated how the tool could work in the future, based on different assessment methods. He also presented one practical case to illustrate the tool’s expected functioning, doing so in a step by step process.

The different CATS impact areas were presented by Rune Elvik (Institute of Transport Economics), followed by an explanation of why they were selected (for more information on the impacts of CATS you can consult this report). Wolfgang Ponweiser (Austrian Institute of Technology) gave an overview of the CATS policy interventions (related to urban transport, economic incentives, access and space allocation). He introduced the backcasting method as a tool to predict the impacts of CATS, highlighting that backcasting starts with the city’s vision – the targets cities want to achieve.

After these presentations, the participants broke up into four smaller groups to discuss the PST and the backcasting methodology. Participants gave their views on the PST structure that had been presented, its usability and the functionalities it should have, and reflected on the reasons why they would use it. The challenges that could be faced during the development of the PST were also discussed, and some ideas on how it could be improved arose. During the discussion, participants also provided insights about the policy interventions they considered to be the most relevant.

Their feedback was collected by the project partners, who closed the session by reflecting on the main conclusions of the workshop and laying out the next steps for the LEVITATE project. 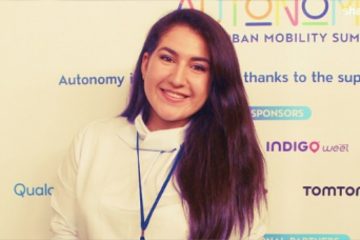 Transport for Greater Manchester (TfGM) is the local government body responsible for delivering Greater Manchester’s transport strategy and commitments. TfGM is committed to leading change and supporting the 10 Local Authorities within Greater Manchester with the implementation of new technology and mobility solutions underpinned by our 2040 Transport Vision and Innovation Strategies. Anna Craciun is TfGM’s lead on  project Synergy and project LEVITATE which have become the foundation for TfGM’s developing Policy and Deployment Strategy for autonomous vehicles.

Q: As a city partner, how do you contribute to project LEVITATE and why did you join the project?

A: Innovation is imperative for the transport sector and TfGM have built a long term portfolio of forward-thinking pilots and projects, including LEVITATE, which are aligned with our 2040 Transport Vision. Project LEVITATE enables TfGM to respond to the fast-paced autonomous mobility sector with robust resources like the Policy Support Tool being developed by the LEVITATE consortium.

Q: What are TfGM’s views on and vision for connected and automated transport systems?

A: The future of commercial automated transport services and their operation in complex urban environments is still uncertain and TfGM, like others, is not in a position to predict this. Instead we can create robust strategies to ensure Greater Manchester becomes a hub for innovation. Extensive collaboration with a myriad of UK and international partners such as the Depart for Transport, the Law Commission, UITP and POLIS has allowed us to develop a set of “guiding principles for automated transport” that will ensure autonomous vehicles emerge in line with our wider vision for Greater Manchester.

TfGM are also supporting the work University of Salford are carrying out as part of their Automotive and Autonomous Vehicle Technology Course that launched in September 2018. This is a great step towards strengthening the labour market in Manchester and strengthens the links with our academic partner in finding new solutions for cyber security and traffic control through live testing and behavioural analysis.

Q: How and in which context are you planning to use the Policy Support Tool? In which way will it be useful for a city in general?

A: Being part of the LEVITATE project has enabled TfGM to input into the development of the PST. This will ultimately allow us to validate the tool and align its outcomes to our 2040 Transport Strategy and our emerging Greater Manchester Policy and Deployment Strategy for Connected and Autonomous Vehicles.

The PST will be a fantastic way for local authorities to consider how they can futureproof their infrastructure, data governance and local policies so that CAV services will be able to operate on their roads and seamlessly travel across district, and even regional boundaries. The tool could also provide a pathway to implementation of the Regional Strategic Principles as it would highlight any shortfalls that different authorities will need to overcome to ensure they are CAV-ready.

Q: When do you think automated transport systems are going to be widespread in urban areas? How do you see this evolution in a short, middle and long timeframe?

A: The driving force (excuse the pun) behind the technology is not the same as that behind public regulation, therefore estimating a timeline for market penetration and uptake in usage/ownership could misinform decision makers. Instead, governing bodies should direct their efforts towards upskilling their staff on new legislation such as GDPR and towards considering what this might mean for new modes of mobility.

CAVs are already being tested in managed and mixed-traffic environments as part of trials and are operating in segregated environments such as university campuses, however, to gain a broader vote of confidence, legal and ethical frameworks must be established at the national and sub-national level so that manufacturers and operators have cohesive guidelines to adhere to.

In the short term, I think the focus may be on connected (and not necessarily autonomous) vehicles, harnessing the benefits this can bring in terms of the data they will generate.

Q: In your opinion, what role should a transport authority, like TfGM, play in relation to the development and deployment of CAVs?

A: TfGM, like other transport authorities, is already engaged in a series of activities relating to the testing, development and deployment of CAVs. I think what makes us stand out is that we are developing our strategy alongside project partners, district colleagues, public and private stakeholders and Greater Manchester Residents.

In October we held our first Citizen’s Conversation on Driverless Mobility. This was a full day workshop with almost 100 residents from across Greater Manchester that allowed us to share the work we have completed so far, ask for advice on which use-cases we should focus on and understand the work we still need to undertake.

Our role, as a transport authority, is to continue this sort of work; first identifying what our resident’s priorities and needs are, and then looking to innovations like CAVs to see how they can be deployed in a way that addresses these priorities.